Posted by mikemunhallphotos on December 4, 2013
Posted in: Travels. Leave a comment

I took a lot of photos on my recent trip to Hong Kong, Macau and China…as I always do.  However, I am not going to share most of them but chose only a few that meant something to me.

This is a fisherman at the end of the day organizing his boat and his catch.  With him in the boat looked like an elderly woman, perhaps his mother.  As I walked past, he looked up and smiled.  He had seen me taking some photos and knew that some were of him.  This scene was in the section of Hong Kong known as Stanley.  It is an interesting confluence of economic cultures.  Some of the most wealthy Hong Kong residents live here.  Much of the white population lives here away from the hustle of the city. Just behind me is the Hong Kong Sea School that takes the less privileged boys of HK and gives them an education.  The theme of the school revolves around the sea which is at their front door.  Along with teaching them to sail, canoe and windsurf it gives the boys a well rounded education that they can take to university if they so choose.  The bay to my right here is the site for the 2013 Asian Windsurfing Championships. In the town just over the ridge behind me in this shot is the village of Stanley, famous for its market.  Stall after stall of hardware, clothing, trinkets, food and wares that people flock to daily.  And then there are the fishermen.  Tied to the sea through generations of people who have made the sea their source of food and income.  Much of what is done today is similar in many ways to what their grandfathers and great grandfathers did years ago.  Next to the push cart with this day’s catch, a Lamborghini revs its engine and peels out of the seaside village. 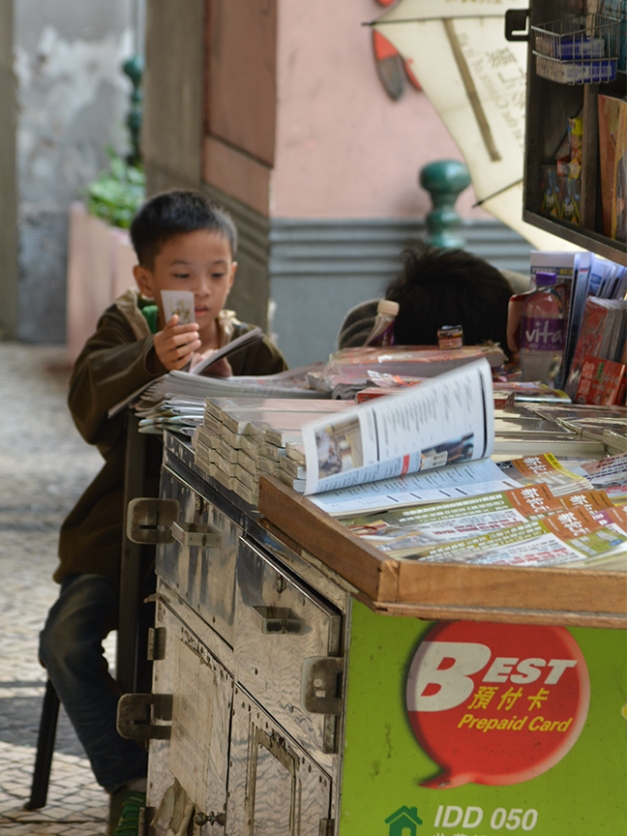 This is the image I am left with after my day in Macau.  Located a few miles south of Hong Kong on the China coast, Macau is similar and different to HK.  Similar in that it is an independently governed province of China that will revert to China 50 years after its separation from Portugal in 1995.  Different in that where HK is the financial whirlwind of the area, Macau is the Las Vegas of China.  Thousands of the nouveau riche of China swarm here to play with their new-found wealth.  In the middle of this wealth was this magazine stall of this boy’s mom.  She exhausted, is sleeping next to him.  He being the good son is reading his comic book while he keeps an eye on the stall and giving his mom a break.  All around him tourist children were laughing and playing but he kept his focus on what he knew was his responsibility.

The Peak is the tourist must for all visitors to HK.  One way to get up to the top of the island is by the Peak Tram.  A funicular rail way of two cars that alternate their time at the top and bottom of the mountain.  I took the tram up to the top and wandered around for a bit taking photos and enjoying the view and lunch.  I saw a path heading down and asked if it went all the way…it did and it would take me an hour to get to the bottom.  So I set out down the hill.  Not far down was Barker Road station.  The station gave a great view of the tram track and I figured I would catch some good shots of the next tram up the mountain.  The tram approached and I clicked away.  As the tram got to Barker Road, it stopped.  There I was with 70 or so passengers in the tram looking out toward the city below and me, alone, standing in their view on the tram station platform.  I looked the length of the cars: some people giggled, some ignored my presence and some looked annoyed that the tram was paused.  But there was this one woman who I could see was trying, discretely to raise her camera in my direction.  She obviously didn’t want to be intrusive to me, but when I saw her motion, I smiled.  That gave her permission to take her photo of me…I waved; her smile broadened.  When she had taken it, I lifted my camera and took this photo…this is her pose, such a warm appreciative smile.  She made my day, I hope I made hers.